Are you a gaming enthusiast? Then definitely a question will arise in your mind, does motherboard affect gaming performance? Well, welcome! Today’s discussion is going to clear all doubts regarding this.

What is a Motherboard?

Before starting with this trending topic, we should all know what a motherboard is! The motherboard is a main, printed logic board made of a couple of transistors and capacitors and ports and slots, which fundamentally try to maintain a stable connection between the processors (CPU or the central processor unit), RAM (Random Access Memory), GPU (Video Card or the Graphics Card) and the power supply.

Primarily motherboard vendors make their motherboard depend on the different Chipset and socket-based on Intel or the AMD CPUs and unalike sizes like ATX, Micro-ATX, ITX, EATX, etc. Generally, EATX types of motherboards are Expensive motherboards. So, this is a very brief idea about the motherboard itself.

If you are a gamer then this question will definitely arise in your mind when you try to build a new gaming PC is that does the motherboard affect gaming performance? The answer is partial No.

We are going to explain the reason behind this now. We have already discussed that the motherboard basically tries to establish the inter-stable connection between each and every hardware component.

Now, let’s take an example to understand the concept clearly. Suppose you are using the old Intel Core i3-6600K CPU along with a dedicated Nvidia 1020 Graphics card and want to play a AAA title game on that machine having ultra-high-definition resolution with decent frame rates. Will you be able to play? You already know the answer; it’s simply No. What does that mean? If you want better performance, then you should definitely buy High-End CPUs which have better CPU clock speed or better graphics cards along with higher frequency RAM sticks that can load the software or the applications very fast, and you can get better results.

But if your motherboard does support the overclocking ability along with better VRM, then you can get better performance as well from that old-age CPU and GPU. If you can overclock the entire system, I mean the CPU itself, GPU, and the Memory, then you can quickly get better output or the performance boost from that lower-capable hardware. But there’s some limit and also risk to it. It can damage that board and the hardware also if you don’t have proper knowledge or experience of overclocking.

I think you have got your answer.

What Makes a Motherboard Good?

Now, we are going to talk about some of the important parts of a motherboard which makes them a better choice among them.

This CPU Socket is one of the most important parts or components of a motherboard. If you buy a new CPU socket motherboard, then it will help you for future upgrades also. I mean, when a new generation CPU will launch, then you can easily upgrade it.

Nowadays, AM3+ is older than the latest AM4 type of socket for AMD Ryzen CPUs. On the other hand, the LGA 1200 is more new than the previous-gen LGA 1151 CPU socket for Intel-Core CPUs. Let’s assume that you are currently using the AMD Ryzen 5 3600 CPU. This CPU supports both the AM3+ or the AM4 CPU socket, but if you buy the latest AM4 motherboard, then it will help you in the future to upgrade to the AMD Ryzen 5000 series processors. The same logic is applicable for Intel Core CPUs also.

The Chipset of a motherboard is an informational hub. This Chipset generally handles all of the information from the processors to the external device and vice versa.

A chipset has all the mentioned features that can be available in the motherboard. There are some limitations in a particular chipset. If you buy any downgrade chipset motherboard, then you cannot use that specific feature.

LGA 1151 socket motherboards with chipsets that are for locked CPUs would be H310, H370, B360, and B365. However, as with how AM4 chipsets are, only B365 chipset motherboards are going to be compatible out of the box with the newest Coffee Lake processors such as the i3-9100.

The PCIe slots or the Peripheral Component Interconnect Express Slots are basically used for the Graphics card itself. Without a dedicated graphics card, you will not be able to get the best gaming experience, even if you cannot render the editing video or graphics-related projects. Nowadays, there are two different types of PCI Express ports available in the market, like 3.0 and the latest 4.0, which are ready for the high-end graphics card but costly also.

There are many different types of PCI Express ports available in the board itself, like X16 slots, which are for the Graphics Card or the Video Card. You will also find X1, X4, X8 extra expansion cards or the PCIe lanes, which are basically for the sound card or the capture card, or the connection adapter. Even 3.1 Gen 2 USB ports help also in this.

Another important hardware of any system is Memory slots or RAM slots. When you load any software or the game, then RAM will help your system to load it faster along with the CPU performance. So, it is required to have a higher frequency RAM module or the RAM slots in the motherboard to get the maximum output.

Does the motherboard limit Frame rates?

The motherboard doesn’t directly limit or affect the Frame rates while you are gaming not depends upon the motherboard type. Gaming Frame rates will definitely depend upon what processors and the graphics card you are using in your system. It slightly depends on the Solid-State Drive also; it means if you are using a traditional hard disk drive, then it takes much more time to transfer the data from the drive to Memory which affects the Frame rates very little.

Now, if your gaming motherboard or the modern motherboard does support overclocking, then it will help you more. Suppose you are playing a particular game and get 60 Frame rates in HD resolution. But after overclocking the CPU and the GPU or the graphic cards, you are getting 100 fps at the same graphics resolution settings. So, in this scenario, the motherboard helps you to get better FPS.

Does the motherboard affect GPU performance?

The answer is simply no. The motherboard doesn’t affect the GPU performance. But there are some features available in the motherboard which help them to work properly or give them flexibility like VRM, the latest-gen PCIe port for future upgradability, Nvidia SLI, or the AMD CrossFireX dual graphics cards support.

It would be best if you choose or select the motherboard which has the better frequency RAM module, latest-gen PCI-E Slots, latest-gen Chipset, and the CPU socket for future upgradability, overclocking ability will push the performance really, better VRM and heat management system because while you are overclocking the CPU and the GPU and the Memory, they required more regulated power supply. They also produce more heat, so the heat pipe of the motherboard and more cooling fan ports should be present in the motherboard.

Ans: Better motherboards does have some better CPU Socket, Chipset, RAM module, overclocking ability. But if you use the same CPU and GPU and RAM in a lower-end motherboard and a higher-end motherboard, you can’t face any performance difference.

Q. Can a motherboard affect performance?

Ans: No, the motherboard doesn’t affect the performance. But if you have overclocking ability, that will make the difference.

So if you still have any doubts, then feel free to ask in the comment section below.

Also, let us know in the comment section if this blog is helpful or not. Don’t forget to check out G-Prime every week for updates.

Although DDR5 RAM looks quite similar to its previous generation DDR4 or DDR3 RAM sticks, they both are in no way compatible. This is typical because RAM generation is not backward compatible. It is not only because of the RAM technology but also because of the fact that DDR4 RAM will not fit in the…

If you are a gamer or productive user, then you are well known as to what a Graphics Card is? If you want to play video games or do video editing or render the discrete GPU, a dedicated Graphics Card is a mandatory component for such things. GPU is a kind of component that is… 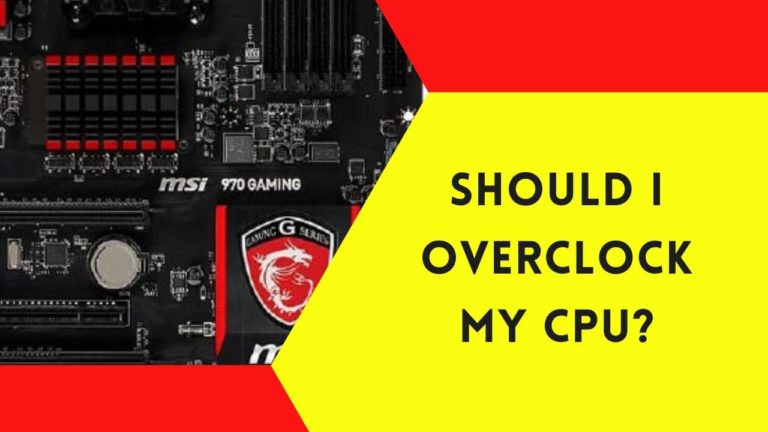 If you are a pro user, then definitely a question will arise in your mind that, Should I Overclock My CPU? Because as an advanced user, you always want to utilize your processor or the CPU utilization and the graphics card to their full potential. Be patient; we are going to clear all the doubts…

Knowing your system’s specs is absolutely important, particularly when you are looking ahead to upgrade its hardware. Well, a lot of times, we keep on running our PC for years without even knowing the integral parts of it, and of which series or model do they belong to! Learning about it is essential to ensure…